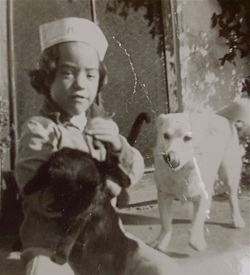 I never out grew my love and connection to animals. I was a very shy kid and felt most comfortable when with them.
When I was in high school and had to think of what to do with the rest of my life my only choice was something with animals.

I was not a good student,  I couldn't see the relevance for some subjects and wasn't interested in learning what was not interesting. I wasn't very social so high school was pretty painful except for my good friends.

So something like more schooling to be a vet or  even a vet tech was out of the question.  Having gone to the local zoo on field trips all through school, I felt being  with those poor caged animals is where I belonged. They needed me and I needed them.

Soon after graduation, I applied at the Cincinnati Zoo. It was 1965 and they were not hiring women.  So I floundered in the outside world finding any work I could,  until 1970 when I became the second women to be hired!  I was in heaven. I was working in the children's zoo and the baby animal nursery. That is where I fell in love with gorillas. In the 7 years I was there, I raised 7.  My rose colored glasses became more clear as I saw how this zoo was more about making money than putting their animals' welfare first. I did learn a lot and formed incredible bonds.

This was the beginning of a wonderful career that went on to include, teaching signed communication to gorillas and an orangutan, off to South America to work  with the pink river dolphin, a rescue ranch, another zoo and finally a wildlife rehabilitator.  Thirty five years in a journey of the heart. (see slide show below)